Breaking hearts and bottles of tequila since 2011

My boyfriend and I are both divorced. I usually tell people, that I am happily divorced and that mine was not only an easy one, but a smooth one. But it doesn’t erase the pain and it never makes dating life any easier. As a divorcee, you always find yourself haunted by the ghosts of your past.

When it comes to the point of wanting to move on, it’s hard to erase that there was once a time where you saw yourself having to date again. No one goes into a marriage with that game plan. And when a marriage ends, no one understands how the heart and the head are to move on. But they do. We do. We move on and fall in love again, if we are lucky.

My boyfriend and I have two very different relationships with our ex spouses. In my case, there is zero contact of any kind. Social media, phone, email, etc. My boyfriend is the opposite. As he has stated several times, it is hard to just end something that was almost 12 years of his life. As his girlfriend, the woman he currently loves, this has been one of the hardest things for me to understand.

I am very much a woman who believes that the end is just that, THE END. It may kill me to move on, and the pain may last long, but my desire to be kind and friendly to an ex, has never been something I have been good at. However, my boyfriends greatest quality is his heart and his amazing ability to care. Throughout our relationship he has been very honest with his ex about his attempt to move on. He has spoken about me and his desire to start having a happy life. And as one might imagine, that has not gone over very well.

Looking at it from the outside, I can understand why. I have been that girl. The one who lost a love, realized what I had and was desperate to get it back. The funny thing is, we always feel like we are the only who has ever gone through this kind of heartache. But for once, I have found myself on the other end. The girl who now has to learn that the ghost of the past is now the third part of the relationship. Haunting us as an ever present shadow. 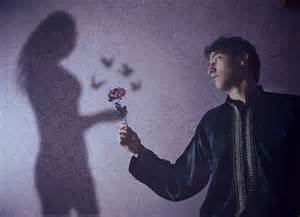 So the question is, how do we move on? Or better yet, how I can I help and support the man that I love? I have found there are four very clear stages in regards to divorce. Denial, Anger, Apology and Acceptance. During denial, we can’t help but say all of the things that might remind us that we are NOT in fact, going through a divorce. “My marriage isn’t over. We can make this work. This is not happening to me.” They may seem outlandish, but these are the words that ring over and over again in our head. And though they may not seem real, and in most cases they are not, they are a comfort to us at that time.

Next comes Anger. I’m not gonna lie, this stage was fun for me because along with the Denial stage, you find yourself taking a lot of blame on yourself. But when you get to Anger, it’s very freeing to release the blame and just get pissed. “I gave this person the best of me. The marriage is over, so now what the hell do I do? How f&*^ing dare she?” You do have to be careful during this stage. If there is ever a time to be self destructive and say, sleep with alot of people, it’s during the Anger stage. So be sure to have an outlet. For me, it was hitting the gym, and cooking… A LOT.

After Anger comes Apology. If you notice, the stages get harder and harder. Often, divorcees feel like this stage is the time where you have to apologize to your former spouse. But it’s just as important to apologize to yourself. Divorce will take you on an emotional rollercoaster that one is never prepared for. At that time, you will feel you have let yourself and all those you love around you, down. But you haven’t. So it is important to apologize to yourself for having those feelings of fear and doubt. Then, you move on to your ex. But remember, a good apology is all about sincerity. Remember, they are going through pain, just like you, so think about what you would want to hear.

Finally Acceptance. I hate this stage. For one, it’s where I find myself with my boyfriend and I . Accepting that the past is the past, that you are in fact a good person who deserves happiness and allowing your heart to heal so that you may move on. Here’s the trick about this stage, it is the hardest because it takes the most time. For some people, like myself, this stage came pretty soon and I felt very blessed when it did. Did I fall and hit some big lows before I got there? Hell yea, I did. But once there, once at the light of Acceptance, life became a bit easier.

So all I can do now, is be there for my boyfriend through his various stages. I can laugh with him, cry for him, be a friend for him, but most importantly, know that this is his journey. And he doesn’t have to do it alone.